These are some of maps I took inspiration from for the design of my map of deprivation in London. I'm not an expert cartographer, so the end result of my map is not as good as these in many respects. 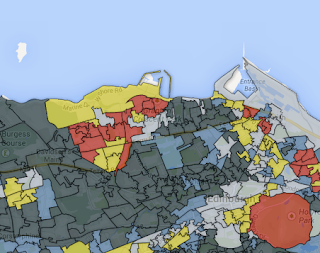 Alastair Rae's maps (including this one of Scotland) inspired me to try using Fusion Tables for choropleth mapping in the first place. Rae is an expert on maps, and his designs and colour schemes are very clear. One of my favourite features of the Scotland map is the full-screen mode.

The Scottish Government's SIMD map has several useful features, including a transparency slider, several options for colour banding, and comparison of areas. 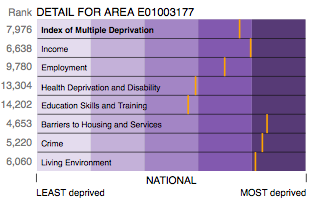 The Data Visualisation Team at the Office for National Statistics have dozens of well-designed visualisations on their Interactive Content page. The Atlas of Deprivation is entirely SVG-based rather than using a detailed map background. The result is a map that responds very quickly to user interaction. The map has several great features including the option to show a local rather than national comparison. The image here shows ONS's legend design. I based my legend on this. Incidentally, I liked this interview with Alan Smith from the ONS team.

I borrowed a number of ideas for features and page design from the Open Data Communities map of England. 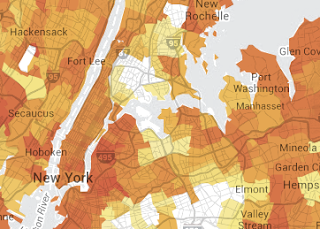 Visualisations from the New York Times are consistently excellent. One thing I've picked up from the NYT's maps is that the background to a semi-transparent choropleth map should be white to avoid misleading colour blends. See this map of Netflix queues for an example.

Another New York Times map has place names above the data. This got me thinking about how to make the base map and text as legible as possible. First, I added some transparency options so that the user can choose between brighter colours and a more legible basemap. Secondly, I brightened up the colours (which I got from Colorbrewer) slightly so that they would appear bright even after being made slightly transparent. It didn't make as much difference to the end result as I had hoped, but I can provide the details if anyone would find it helpful. 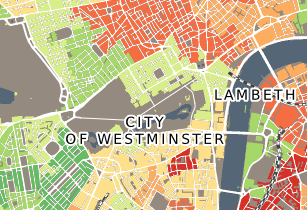 I really like this map by Oliver O'Brien, which only colour-codes the area occupied by housing, but I'm not skilled enough to do anything similar!